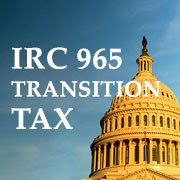 Here's a background to the transition tax  -
http://www.mooresrowland.tax/2018/03/dealing-with-transition-tax.html

The IRS previously announced its intention to issue tax return review notifications beginning January 1, 2020. These audits will be pursuant to the Section 965 compliance campaign that the IRS announced in November 2019. Accordingly, taxpayers who had reported the transition tax should be prepared for an audit of their calculation as well as other items on their returns.

When it enacted section 965, Congress expected the transition tax to raise more than $338.8 billion of revenue. So far the section 965 revenue actually collected is much lower than expected.  In November 2019, the IRS announced on its website a campaign to promote compliance with section 965 (see IRS announcement here).

The new campaign provides few details on what specifically will be the focus of the IRS in section 965 exams. It is anticipated that this campaign will focus on
(1) computational issues, such as the calculation of the accumulated earnings and profits of the foreign corporations and the amount of the estimated tax paid and the foreign tax credits claimed by U.S. taxpayers;
(2) definitional issues such as determining what constitutes cash and cash equivalents; and
(3) the anti-abuse rules in Treas. Reg. section 1.965-4 relating to reducing the section 965 inclusion.

The campaign will focus on large section 965 inclusion taxpayers and will use filters to identify other potential high-risk filers – for example, those who filed Forms 5471 with positive earnings and profits.

The campaign will include conducting examinations as well as providing technical assistance to IRS teams on examining returns for section 965 compliance, with a focus on identifying taxpayer populations with potential material compliance risk. The campaign will start with 2017 returns; however, taxpayers chosen for audit likely will have their 2018 returns examined as well. It is anticipated that returns selected as part of the 965 campaign will also be examined for other material issues, especially issues related to TCJA planning.