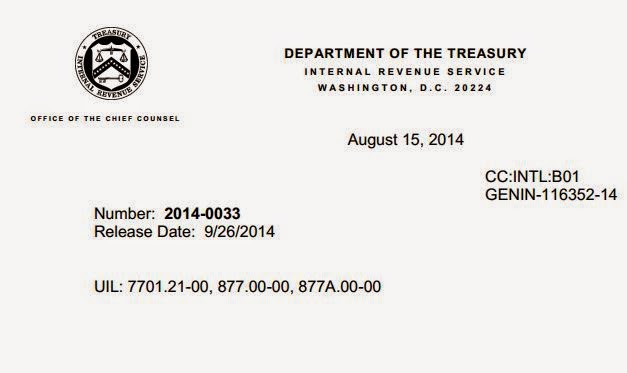 The IRS has released this Information Letter 2014-0033, with information about the U.S. tax regime for "green card" holders.
The background is that non-citizen residents of the U.S. are subject to U.S. tax.  Key excerpts are:


Section 7701(b)(6) provides that an individual is a lawful permanent resident of the United States if he or she has the status of having been lawfully accorded the privilege of residing permanently in the United States as an immigrant in accordance with the immigration laws and such status has not been revoked (and has not been administratively or judicially determined to have been abandoned). Lawful permanent residents are colloquially referred to as “green card” holders.


Many green card holders may also be treated as residents of a foreign country—under that foreign country’s domestic law—with which the United States has an income tax treaty in force. Such an individual is a “dual resident taxpayer.” See Treas. Reg. § 301.7701(b)-7(a). Income tax treaties typically have tiebreaker rules that apply to determine the residence—for purposes of the treaty—of an individual who otherwise would be treated as a resident of both the United States and the other country. See, e.g., Paragraph 3, Article 4 (Residence) of the U.S. Model Income Tax Convention (2006). If a green card holder would be treated as a resident of another country under a tiebreaker rule in an applicable income tax treaty for a taxable year, he or she may claim a treaty benefit as a nonresident alien for purposes of computing his or her U.S. income tax liability with respect to that portion of the taxable year he or she was considered to be a dual resident taxpayer. A dual resident green card holder may compute his or her U.S. income tax liability as if he or she were a nonresident alien by filing a Form 1040NR with a Form 8833 attached, as explained in Treas. Reg. § 301.7701(b)-7(b) and (c). See also “Effect of Tax Treaties” in Chapter 1 of IRS Publication 519 (U.S. Tax Guide for Aliens). If issues arise as to the proper interpretation or application of a treaty, the Competent Authorities may assist under the terms of the Mutual Agreement Procedure Article in the applicable treaty. See, e.g., Rev. Proc. 2006-54, 2006-2 C.B. 1035 (Nov. 17, 2006).

With that background, the Information Letter addresses the following subjects: