January 16, 2014
So a Democrat President promotes a healthcare plan at the Federal level, that was first initiated by a Republican Governor at the state-level. For those that argue that American politics is more divisive than ever, one of the easiest examples to consider is Obamacare.  The propaganda from both sides of the aisle is nothing short of fascinating.

Regardless, here're the facts.  On June 28, 2012, the Supreme Court, in a five to four decision, held the insurance mandate and, thus, the Affordable Care Act (ACA) to be constitutional.  The Treasury Inspector General calls this the biggest tax act in 20 years.

The Affordable Care Act (P.L. 111-148), signed by the President on March 23, 2010, as amended by the Health Care and Education Reconciliation Act of 2010 (P.L. 111-152) and signed by the President on March 30, 2010, implements fundamental health care reforms and requires many of the 32 million uninsured individuals to obtain health care coverage or pay penalties. American Tax Singapore

Most lower-income individuals, along with some middle-class families, will receive government help to pay for health insurance purchased at state Exchanges.  ACA contains more than $400 billion in new taxes and revenue raisers on employers and individuals. Major changes include:
1. Individuals without health insurance will owe a penalty (tax) starting in 2014;
2. Employers with 50 or more full-time employees must offer affordable health insurance to their
employees beginning in 2015 or pay a penalty;
3. State insurance exchanges will be established to allow clients to shop for insurance;
4. Employee Medicare tax increases by 0.9% (total of 2.35%) on annual wages for married couples
with an AGI over $250,000 and singles with an AGI over $200,000 starting in 2013;
5. A new Medicare tax of 3.8% applies on net investment income for married couples with AGI over
$250,000 and singles with AGI over $200,000 starting in 2013;
6. Extensive new penalties apply on tax shelters;
7. The “haircut” to deduct medical expenses increases from 7.5% to 10% of AGI starting in 2013;
8. FSA contributions for medical expenses are limited starting in 2013 to $2,500. and
9. Children under age 27 may be insured under their parent’s health insurance policy. 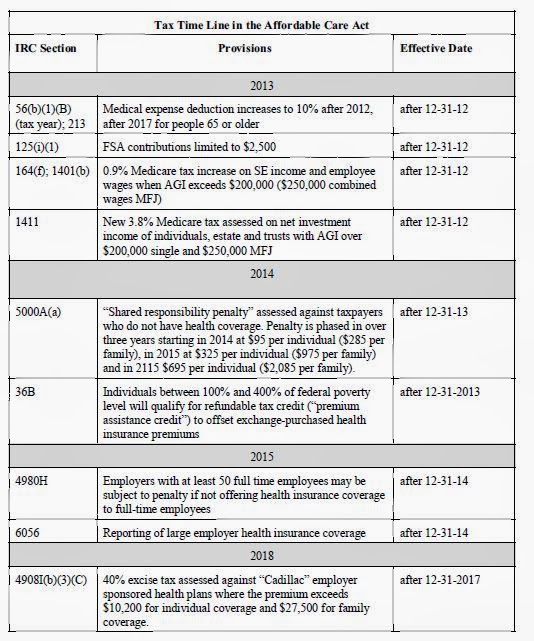